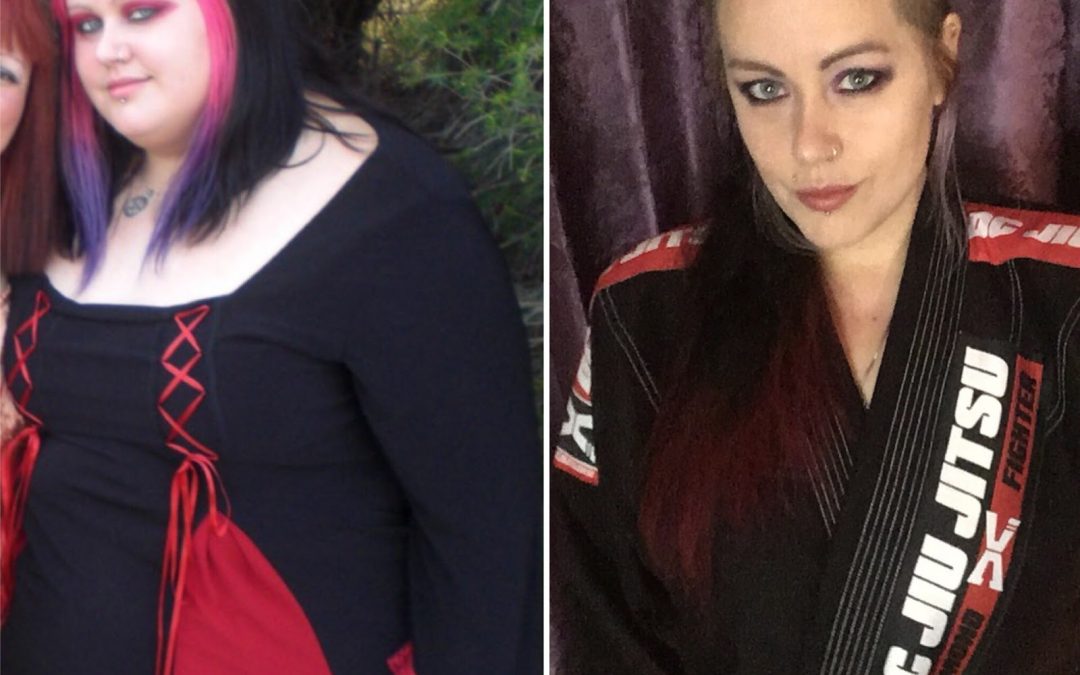 Determination to push past my comfort zones and self-imposed restrictions has played a major role in my goal setting this year – and one of the biggest goals that I set myself was to start learning a martial art.

When I first told my family that I wanted to start learning Brazilian Jiu Jitsu (BJJ), they laughed because they thought I was making a joke. They weren’t being cruel, they honestly thought that I was trying to be funny because this was such an unexpected thing for me to tell them.

I’d secretly wanted to learn a martial art my whole life, but the reality was that from a very young age I was far too big for activities like that. When I was at my heaviest, not only was I completely unfit, but I could barely walk 100 meters without severe pain in various parts of my body.

So learning a martial art was certainly not a possibility, and so I gave up on the idea. It became just another unfulfilled and almost-forgotten dream for a long time.

At some point over the years, I came across a YouTube video of Maynard James Keenan hip-throwing a guy who jumped on stage. I remember being both amused and impressed, and desperately wishing I could do things like that.

And, while I’m not one for sycophant behaviour or ‘fangirling’, I will admit that over the years I’ve found MJK – a creative and multi-talented man, multi-tasking pro, and polymath – to be a source of inspiration to me. (He’s also one of only 2 people I’ve ever discovered whose words elicit an unparalleled visceral response within me; what I sometimes refer to as ‘donkey-punching me in the soul’…)

So I thought I’d try to learn more about how MJK was able to throw that guy so masterfully, and it lead to a path of inquiry upon which I discovered that he was skilled in both wrestling and BJJ.

Time went by, and I don’t remember how much weight I’d lost when I saw the video again. But, having experienced significant mobility and health improvements from having lost a lot of weight so far; when I watched the clip this time, the spark of wishing that I could do that type of thing came back to me… But this time I realised that maybe I was now reaching a point where I’d actually be able to make the dream a reality.

I was now inspired to start learning more about BJJ – and I loved what I was seeing, so this was definitely what I wanted to do. And I promised and challenged myself to push beyond my comfort zone by joining a class once I’d lost enough weight. (FYI I didn’t feel that wrestling was for me. Also, the risk of ‘sumo’ jokes was too high. Just kidding…) (not really kidding).

I had guessed that losing 65kg (143lb) would be enough to allow me to move around sufficiently and comfortably, and to not seriously injure someone if I landed on them (no, really, this was a serious concern!)

As the goal weight was nearing, I let my intuition (via Google) choose which academy to join. I called to ask about the classes and my concerns of still being overweight and hurting others or myself, to make sure that joining would even be an option.

The person on the other end of the phone was the head instructor and owner of the academy, Daniel, and he took the time to listen to my concerns. He was so kind, reassuring and encouraging. And in just a short phone call, he was able to allay many of my fears. That one phone call had such a positive impact on me.

So now I had my goal, knew which academy I wanted to attend, and no excuses – and I was excited and terrified.

I spoke with my husband about how scared I was, and he asked if I wanted him to go with me, or if going with a friend might be a good idea. And both of those options would have been great. But I knew I needed to do this alone, because that was another challenge for me.

Without sharing my whole story and history, which I’m just not prepared to do, you may not understand what a significant step it is for me to go to strange new places alone, be surrounded by groups of strangers, and to let them be right up in my personal space, touching me, and putting their bodies all over me (heavily, for long periods of time… Hello, ‘side control’).

But I refuse to be a victim, or to be crippled by my own anxiety, fear and baggage any longer. So I’ve been trying to maintain a greater focus upon a stoic and clinical approach to understanding myself and these issues, and to finding a solution to them. And to understand my shadow.

The better I understand it all, the better I can manage it. And I refuse to let all of this bullshit impact on me so severely anymore.

So I was terrified of starting BJJ by myself – but that’s exactly why I needed to do it. Enough is enough. While I may not have been actively wallowing in victim mentality, I had been letting myself be a victim for too long, nonetheless.

On the day I was planning to take my first class I must have talked myself in and out of attending about 50 times throughout the day. I went through so many emotions, but I forced myself to go – and it’s one of the best decisions I’ve ever made.

Now, it’s mid-December as I write this, and I’ve been attending multiple classes each week for a few months. I was hooked straight away.

I remember driving home the night after my first class, with a big grin on my face. I was happy, I was excited for the next class – and I was proud.

I’d never done anything like this before. And, even a year ago, if you’d asked me or anyone who knew me if they could see me joining a BJJ (or similar) class and attending multiple classes a week, we’d have laughed in your face (politely, I’m sure). But I’ve changed a lot, particularly in this last year.

I know I still have a long way to go in healing from all the bullshit and baggage, but committing to learning BJJ is helping me more than I ever could have imagined – and in so many more ways than I ever expected.

It’s having such a positive impact on my life, and my healing process, and I’m so grateful that things fell into place the way they did. I just wish I could articulate my feelings in a manner which would allow you to truly understand just how much of a positive impact this has had on me in just a few months.

My sincere gratitude goes to Maynard James Keenan for being the inspiration for me to make this life-changing decision. And to Dan for being such a wonderful and supportive coach, with such skill, knowledge and genuine passion to teach and support BJJ students – and for making me feel included as part of the DCBJJ family from day one (and to everyone at the academy for being so supportive and inclusive).

Okay this is starting to feel like I’m giving some kind of award speech, so it’s probably time to wrap this blog up.

No matter where you are now, or what your dreams are; don’t give up. Set goals for yourself and start working towards making those things a reality.

This blog was originally posted on my Fit, Fierce, Fulfilled blog on Blogger on 18/12/2017